Review: New musical brings meteoric rise of The Osmonds to the stage at Southampton’s Mayflower 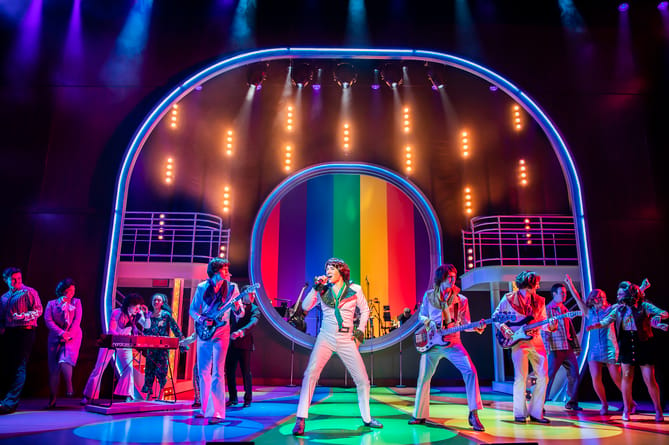 Alex Lodge (centre) and the cast of The Osmonds A New Musical, (Pamela Raith )

They were the biggest boy band in the world in the early seventies, so it’s no surprise that the story of The Osmonds is the latest musical based on a back catalogue of hits to come to the stage. The wonder is that it took so long.   Consisting of five brothers from Utah – Alan, Wayne, Jay, Merrill and Donny, the heartthrob of the group – The Osmonds were known for their clean-cut image and perfect harmonies.   Their story as told in the musical was written by middle brother Jay, and it is through his eyes that we see the band’s ascent from child television stars to global teen idols before falling out of fashion and into debt.   The Osmonds sold 100 million records, as we are reminded several times in the show, and were followed by legions of screaming teenage fans, while younger brother Jimmy and sister Marie carved out complementary careers.   The family stood out for its undeniable talent and so a lot was demanded of the cast assembled to play them at the opening of the production at Southampton’s Mayflower, but, boy did they deliver.   They may not have looked much like the Osmonds with their toothsome, beaming smiles, but they had all the moves off to a T and the scintillating vocals were probably the best I’ve encountered at the venue. Simply stunning.   Hit after hit was performed with unfailing energy across a variety of genres, reflecting the eclectic range of the Osmonds themselves and something of their magic. Little wonder then that a flicker of  “Osmondmania” was reignited in the auditorium with middle-aged women waving their arms and bodies, and the whole audience getting to its feet.   Unusually, the young cast members were equally as impressive as the adults, doing justice to the brothers as children with convincing accents and a flawless barbershop rendition.   This is how the Osmonds’s story started – with Alan, Wayne, Jay, and Merrill singing to raise cash to buy hearing aids for their two deaf, elder brothers (who despite being mentioned a number of times are, curiously, unseen) before being snapped up for the Andy Williams Show.   Record deals followed and The Osmonds found themselves topping the charts, but success came at a price, which was paid by subsuming their individual needs, desires and feelings for the benefit of the family as a whole, be that suppressing sibling rivalry, forsaking friendships or abandoning artistic direction for commercial popularity.   Raised with military discipline as devout Mormons and dominated by a war veteran father, their lives were summed up in his motto: Faith, Family and Career. It was this code expressed through hard work that made them miss out on an ordinary upbringing but also made them the phenomenon they were.

All you need to know about Haslemere’s famous Christmas Market on December 4...

Lots of festive fun is coming to Grayshott this Christmas – starting this week!

Review: Adventure before dementia at the Best Exotic Marigold Hotel

Coming 50 years after The Osmonds were at their peak, this thoroughly enjoyable show is a nostalgic reminder of their heyday for old fans and a timely opportunity for the younger generation to discover just what all the fuss was about.

The Osmonds: A New Musical runs at The Mayflower Theatre, Southampton, until Saturday, November 12. Book tickets (£15 to £44.50) here.