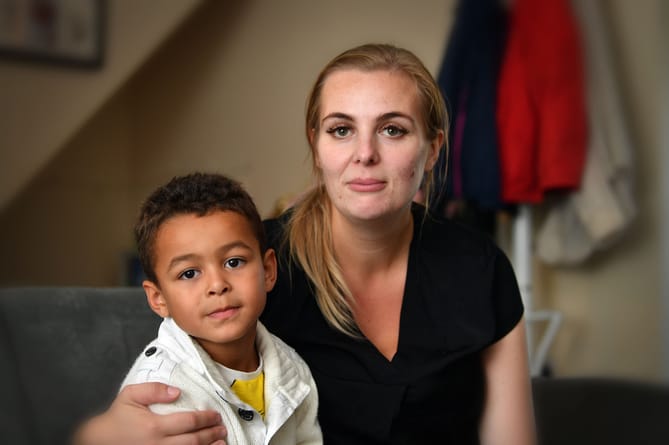 Aimee James of Ash Vale and her son Isaac, they are battling the council to get transport for Isaac to get to school. (SurreyLive - Grahame Larter )

Nearly 150 families have been left “in limbo” and facing additional stress without school transport as Surrey County Council deals with more than 500 applications.

The authority said “urgent” steps were being taken to deal with the backlog, described by one councillor as a “tsunami” of cases.

One single mum on Universal Credit is paying around £10 a day to take her son to school by public transport, and claims she has not had it confirmed by the council when she will be reimbursed.

Aimee James’s son, Isaac, is in his first year at Gosden House School for children with learning and additional needs.

Headley Down man wanted for driving on A3(M) when disqualified

While she said the school have been understanding about the difficulties she faces, having to drop her other child at school in Woking and then come back to Guildford to get a bus to the school, Isaac is still doing shorter days because she “can’t be in two places at once”.

No confirmation of when reimbursement will come

Miss James said she only has a couple of hours in the middle of the day before she has to turn around and do the journey again for pick up.

She added: “It’s really stressful because I’m a single parent, and I don’t drive. I’m also on Universal Credit, so trying to get him to school is a real pain.”

Her son, who has autistic traits, is “not brilliant” on public transport and Miss James said the transition has not been an easy one for him.

While the council has confirmed it will reimburse those who are out of pocket while waiting for transport to be arranged, Miss James said she hasn’t had confirmation of when this money will come in.

She added: “At the minute, life on Universal Credit isn’t brilliant anyway. Because I’ve got to spend out before they reimburse me, I’m sort of skint before they give me my money back.”

A spokesperson for the county council said “complex and significant challenges” and a 20 per cent increase in the number of applications for transport on last year were leading to the delays.

They said staffing resources had been increased and temporary financial allowances were being given to allow families to make alternative arrangements where possible.

Councillor Nick Darby, Residents’ Association and Independent Group Leader on the county council, said he’d heard of several cases from residents and also from other councillors.

He described it as like a “tsunami” of cases, and said he had never seen it like this before.

He’d heard of children who simply couldn’t go to school, others whose parents had taken most of the day out of their jobs to do school runs, and children who were “hugely stressed” at the lack of routine.

He called for better communication from the council with parents and councillors, saying because many of these cases related to children with additional needs, it was “very difficult and challenging” for the parents concerned.

Cllr Darby said the council was “just not delivering what we should”, and of the lack of communication with families, said: “Just ignoring it doesn’t do us any good.” 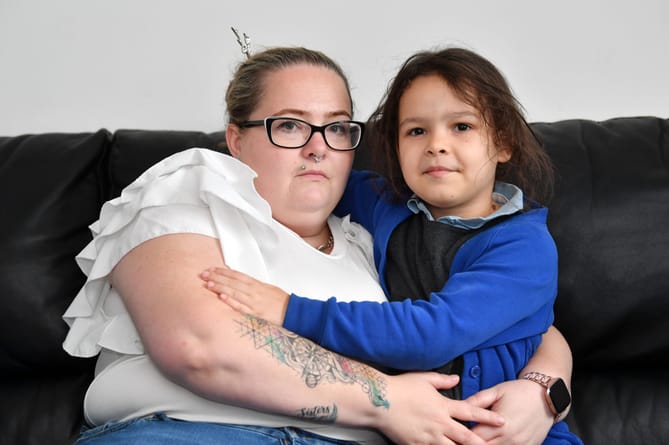 Mum of four, trying to sort transport for her youngest, Justice, who is six, but SCC have left her in the lurch. (Surrey Live / Darren Pepe )

‘I’m crying a lot, because I’m so emotional’

Another parent who has been juggling multiple school runs is Claire Nash, whose daughter Justice is currently attending a mainstream school but awaiting a place at a specialist school.

Her school taxi was cancelled last school year but Ms Nash said it should have then been extended until July 2023, because of the circumstances she faces in trying to get her four children, three of them with additional needs, to school.

Having emailed the council on September 6, she is yet to hear back at the time of writing, and is currently getting her daughter to school late every day after taking her eldest two children to school and then waiting for a mini bus to take her son to his school.

She said: “I’m so stressed out, my life is very stressful anyway, but I’ve lost sleep over it.

“My life’s already hard and I have to fight for the things that should just be easy to get considering my circumstances.”

A Surrey County Council spokesperson confirmed that as of September 20, there were 529 school transport applications being processed, of which 196 were received before the start of the academic year.

There were 149 families who had had their eligibility confirmed but had not yet had transport scheduled.

These families had been offered temporary financial allowances in order to make alternative arrangements.

As well as this, there are currently 141 families going through an appeal process for school transport, which the spokesperson said the independent appeal team were working through at an increased rate in order to process them as quickly as possible.

The spokesperson said they could not comment on any individual children, but the council “would like to sincerely apologise to anyone experiencing delays” with their applications.

They added: “As with many services nationally we are dealing with complex and significant challenges, particularly with driver shortages in some areas.

“We are concerned about the delays some families are facing and are taking urgent steps to address this by increasing staffing resources and offering temporary financial allowances to enable families to make alternative arrangements, where possible.

“We are determined to do everything we can to support children and young people that need us most.

“We know how important it is for children and young people to have access to their education setting and we are working tirelessly to manage increased demand and address issues.”