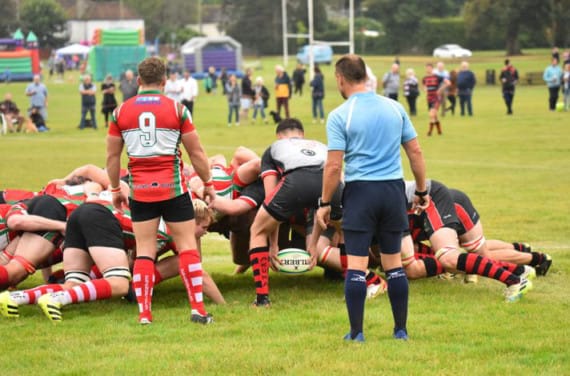 Both teams gave it their all in a stop-start affair with numerous penalties.

The last of these penalties was to be decisive and while Field celebrated, the impartial fan in the large partisan crowd must have felt sympathy for an Alton team who fought back impressively after a slow start.

The match was won and lost in the first and final ten minutes. Petersfield started brightly, marching the Alton scrum ominously backwards in the first few minutes.

FREE hot drink for every reader at Heidi Farnham and Haslemere in this week’s Herald!

Horror, feminism and comedy at the Phoenix Theatre in Bordon

Field’s scrum was dominant throughout, which meant Alton could not develop a platform and ultimately led to the difference between the teams.

But in loose play it was very even throughout, and Alton’s backs’ and forwards’ aggressive tackling was positive.

Field created space out on the left early on and scored their first try to go 5-0 ahead.

The visitors were then awarded a penalty, and extended their lead to 8-0.

Alton needed to find a spark from somewhere. Joe Gwyther took a quick penalty and was tackled, but Field were penalised again for not retiring ten metres, and the game seemed to pivot in favour of the hosts.

It was now the turn of Field to persistently infringe and they looked a little rattled - at one stage being marched back a further ten metres after some comments to the official.

Cameron Hamer scored two penalties and Alton were only two points behind at 8-6.

A few minutes later, Field were again on the wrong side of the referee and they had a player sent to the sin bin.

With a few minutes to half-time, Hamer kicked another penalty to give Alton a 9-8 lead.

The home side took the game to their visitors, and Caleb Wolfreys made a couple of surging runs. George Lucas and Hamer came close to scoring, but the Alton backs were never really able to create a clear opening.

Field’s 14-man stubborn defence was now looking for the half-time break, but not before Hamer slotted a further penalty to increase Alton’s lead to 12-8 at the break.

Ben Burridge came on at the interval and instantly made an impact at the first line out.

Ollie Burden kicked magnificently to force Field back into their 22, but nothing came from the pressure.

Field then thought they had scored, but the ball was held up over the line, and even though Gwyther’s drop out was charged down, Field knocked on. However, every scrum was a chance for Field to regain the ball. Eventually Field chose an attempt at goal after a few penalties to narrow the score to just a single point.

Gwyther’s high kick-off, coupled with a superb chase from Karter Whittock, caused panic in the Field defence. Lucas did well to somehow grab the ball off the back of the resulting scrum, but there was no solid platform for the half backs as all passes were made under significant pressure.

Field kept being penalised in the loose, and Hamer kicked another penalty magnificently from out wide to make it 15-11.

High kicks from Gwyther, backed up with some aggressive tackling from the whole team, meant Alton maintained the territory advantage.

After a high tackle on Tom Smethurst, Hamer duly kicked his sixth penalty of the game to give Alton an 18-11 lead with less than ten minutes to go.

Field chose to kick to the corner after an offside Alton penalty, and the rolling maul from the lineout proved to be an unstoppable force and Field scored their second try. The conversion was missed and Alton retained a narrow 18-16 lead with five minutes left.

Petersfield won a number of penalties, and the referee lost his patience and sent Wolfreys to the sin bin for collapsing a maul. Field scored their third try to take a 21-18 lead with three minutes to go. Alton marched back and were awarded a penalty in front of the posts. Hamer kicked the penalty to level the scores.

If the referee had blown his final whistle at this point, many would have agreed this was a deserved outcome.

Petersfield’s kick off was secured by Smethurst in mid-air. He collapsed to the floor, and the referee decided Smethurst had held on in the tackle, and Field were awarded a penalty.

Field’s fly half confidently stood up and kicked the points with the final play of the game to the delight of those who had travelled from Penns Place.

Petersfield remain unbeaten and valiant Alton at least had the consolation of a losing bonus point - but it could have been so much better.