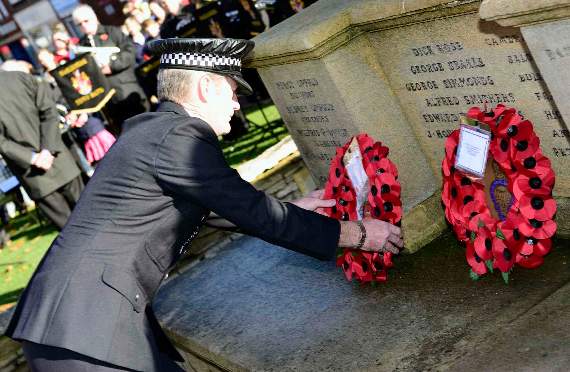 A Surrey Police officer lays a wreath during the Remembrance Sunday parade at Haslemere War Memorial in the High Syreet.

THERE was a record turnout for the Remembrance Day service led by Haslemere rector Rev Mary Bowden at the town centre war memorial.

It followed the traditional 10am service at St Bartholomew’s Church and the parade to the memorial led by the rector and Haslemere Mayor Sahran Abeysundara, comprising county, borough and town councillors, representatives from the Royal British Legion, armed forces, emergency services, and air cadets, Brownies, Guides, Cubs and Scouts. At 11am, the two-minute silence was observed and with traffic stopping in an act of respect before Peter Foster sounded The Last Post and wreaths were laid.

Rev Bowden said: “It was really inspiring to see St Bartholomew’s Church full on Sunday morning for the annual civic Remembrance Service, and then to walk down alongside the mayor through Haslemere to the war memorial at the head of a varied assortment of veterans, councillors and many other groups and individuals.

“We were joined by more along the way and found another crowd already assembled by the memorial when we arrived – more people than ever before.

Wrecclesham coach builders had busy social diary: Peeps into the Past

“In church and in the town centre we gave thanks for all those who have given their lives in the cause of peace, reading their names aloud and keeping silence together with the whole nation as the clock struck 11am. In these difficult times, it’s really important to honour those who have gone before us, by keeping their memory alive and by living in ways which would make them proud of us.”

Mr Abeysunadra said: “It was wonderful to see so many residents turn out to show their respects at this important event. My grateful thanks go to the rector for conducting both services and Haslemere Air Cadets, who once again did a fantastic job of marshalling the parade, and town crier Christian Ashdown for organising the wreath laying.”

He also thanked all the volunteers working behind the scenes.