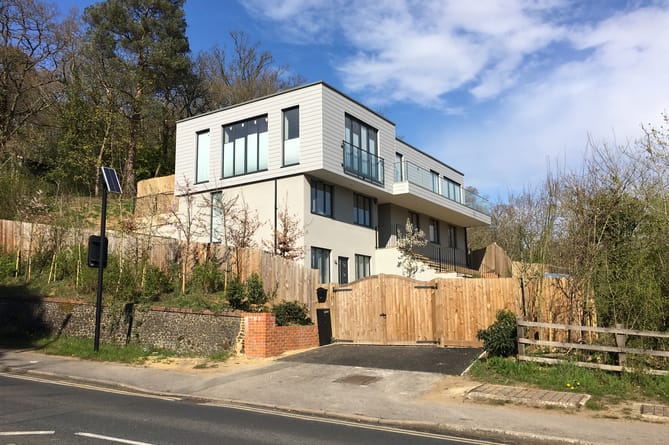 17 Frensham Road: Not as ‘nestled into the hillside’ as was promised... (Daniel Gee / Farnham Herald )

Locals are queuing up to help demolish a house built without planning permission in Lower Bourne, a councillor has said.

The towering three-storey home overlooking The Fox pub off the A287 Frensham Road has become a notorious local landmark – and an eyesore likened to ‘shipping containers’ by many – in recent years.

But to the joy of its detractors, a ruling by the Planning Inspectorate last week has now opened the door to enforcement action and a potential demolition order.

Planning permission was granted for the site at 17 Frensham Road in 2017. But Waverley Borough Council planners say the current home was not built in accordance with these plans – being six metres further to the south than planned, rotated approximately ten degrees from the consented dwelling, and around two metres higher than planned.

This was refused by Waverley planners, and last week a government-appointed planning inspector threw out the applicant’s appeal against Waverley’s decision and upheld the council’s refusal.

The borough is yet to initiate fresh enforcement action – but councillor for The Bourne, Carole Cockburn, has said the only option left is for the building’s ‘removal’.

The original planning permission for a home at 17 Frensham Road was for an ‘innovative cantilever design’, which would sit further into the steep hillside plot off the A287 and nestle into the wooded backdrop.

But according to Cllr Cockburn, “it was obvious very early on that the building was not being constructed as per the permission”.

She continued: “The building was larger, set six metres further south and with ugly additions. Enforcement was threatened, so the builders came back in for retrospective permission for the retention of the building as constructed.

“The inspector dismissed the appeal. There is now no planning permission associated with the existing building and enforcement proceedings will be started.

“I would like the building to be removed, as I cannot see how you can make the building acceptable but we shall see. I have had several offers to help with the demolition!”

A Waverley Borough Council spokesperson confirmed the council is yet to initiate enforcement action, but added Waverley’s planning enforcement team “is aware of this matter, and it is currently under consideration”.

Alan Gavaghan, chairman of The Farnham Society, also called for the council to send a message to other developers seeking to flout planning agreements by taking strong action at 17 Frensham Road.

He  said: “From a planning point of view, we support the position that contractors should not be allowed to build and flout approved plans and we therefore support the ultimate sanction of enforcement.

“You cannot help but feel personal sympathy [for the new owners of the house] but without enforcement, planning rules would be regularly trashed.”

The Herald requested a comment from Michael Conoley Associates (MCA), which is listed as agents for the appeal scheme, but the Farnham-based architects have distanced themselves from the development as constructed.

A spokesman said: “While MCA were the architects for the scheme originally consented in 2017, they were not involved in the design, the subject of the appeal. MCA acted solely as agents for appeal and await further instructions.”

A further request to be put in touch with the applicant has so far gone unanswered.