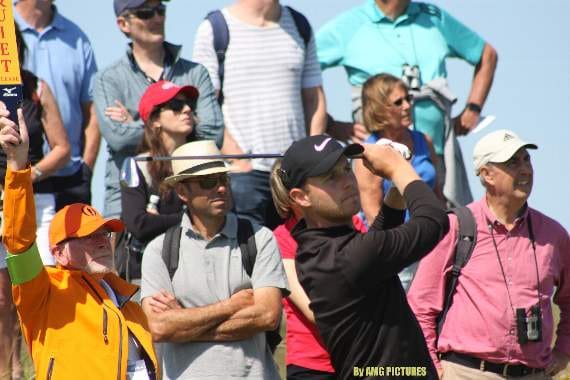 In the big time now: Harry Ellis plays to a gallery during his preparation for the Open. ()

Andrew Griffin, Hampshire Golf’s media man, was at Royal Birkdale to follow the progress of the county’s own Harry Ellis during practice and the two rounds he played at the Open Championship alongside partners Darren Clarke and Gary Woodland. He writes:

HARRY Ellis may have exited the 146th Open Championship earlier than he hoped, but could be proud of the ringing endorsements from his playing partners at Royal Birkdale.

Ellis, the reigning Amateur Champion, failed to make the cut after rounds of 77 and 75, but Gary Woodland, one of the biggest hitters on the US Tour, who lost to Rory McIlroy in the World Matchplay final in San Francisco two years ago, declared that Hampshire’s rising star had not played 13 shots worse over those tough 36 holes on his Open baptism.

The Kansas veteran, who posted a one-under total on Friday after rounds of 70 and 69, said: “Obviously he had some bad bounces, but the kid’s got an unbelievable amount of talent. He’s got a great head on his shoulders. I loved his attitude.

“Obviously he has a big month coming up. He won the British a couple of weeks ago and the Walker Cup and US Amateur are coming up. I’m excited for him. He’s got a lot of game and I think he’ll be out here on tour very soon.”

At one point in the rain and gloom, Woodland, who is up there in the longest driving distances on tour with US Open champion Brooks Koepka, walked up to Ellis’ ball on the 16th, thinking it was his drive.

“I couldn’t tell. It was raining so hard, I didn’t see what he hit. I knew I hit a three-wood, I just expected he had as well. I hit it straight, I figured that was me. The kid has a lot of speed, hits it a long way, and his short game is very good.”

Ryder Cup captain Darren Clarke, who won the Claret Jug at Sandwich in 2011, was also impressed, even if Ellis missed the cut by seven shots in the end.

Clarke, who shot 75 and 73 to miss the weekend by three, was seen talking to Ellis and his caddy, Micky Doran.

“Gary and Darren were very complimentary and a great pairing to be with,” said Ellis. “I think I impressed a few people, but it was just a shame that I didn’t produce the numbers.

“That is golf sometimes. But I’ve come away with plenty of positives and even more belief.”

As well as his family, who travelled up from Hampshire and London, the Meon Valley member was supported by girlfriend Morgane Metraux, a fellow Florida State University golfer, who flew in having competed in last week’s Women’s US Open at Trump National and walked every hole and watched every shot.

“It was special to have Morgane there after making her Major debut herself the week before. We have achieved a lot together and it’s great to share those moments.”

Ellis has declined the chance to equal another of Sir Michael Bonallack’s amateur records by becoming just the second player to win the British and English Amateur titles in the same season.

He will miss next week’s event at The Berkshire in Ascot. Ellis has to be back in Tallahassee in late August and is teeing it up in the US Amateur at Los Angeles’ famous Riviera club (August 14-20) after a two-week holiday.

He is also expected to be in the Great Britain & Ireland Walker Cup team to face America at Los Angeles Country Club from September 9-11.

Harry Ellis was a stunned spectator watching the climax to the 146th Open, just like millions of TV viewers, as Jordan Spieth produced five of the most dramatic holes in major championship history to claim the Claret Jug by three shots from his fellow American, Matt Kuchar.

Ellis, 21, is just two years younger than Spieth who is now three-quarters of the way to becoming the youngest-ever player to complete a grand slam of majors, with the USPGA coming up in two weeks at Quail Hollow.

“It was a very dramatic final few holes, but the course was set up to provoke that sort of thing happening,” said Ellis. “It was a great final hole where a championship could be won or lost.”

It certainly whetted his appetite for more professional golf, even if he intends to complete his degree and play in next year’s Masters and US Open before thinking of making the switch.

“You can’t help but take something from this experience to prepare for the next step. Obviously there’s plenty of opportunities to play ahead and this is my first pro event in a first major. You’ve got to take the most from it. I feel like my game is there.”