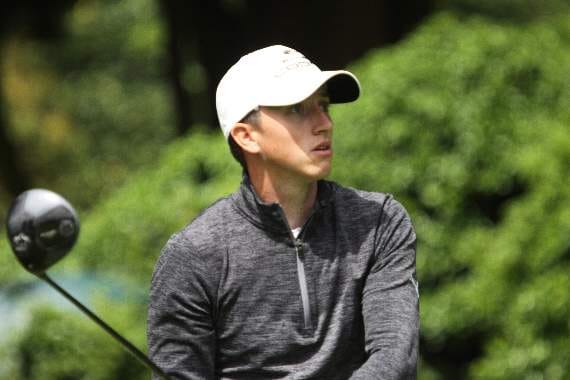 Billy McKenzie admitted he had become distracted in recent weeks by his desire to qualify for the US Amateur at Pebble Beach in August. Picture by ANDREW GRIFFIN ()

HAMPSHIRE’S hold on the British Amateur Championship is over after Rowlands Castle’s Billy McKenzie was knocked out in the second round by the nephew of three-time Major winner Ernie Els.

South African Jovan Rebula was ranked at 196th in the Official World Amateur Rankings going into this week’s championship at Royal Aberdeen, and the US college golfer, who played for Auburn in the NCAA Division One Championship at Karsten Creek at the end of last month, emerged the winner by 2&1.

Hampshire were the first county to have different winners back-to-back in the championship’s 133-year history after Harry Ellis’ victory at Royal St George a year ago.

McKenzie admitted that he had become distracted by his goal of trying to make England’s six-man side for next month’s European Amateur Team Championship – and earning a place in the world’s top 50 to guarantee a place in the US Amateur field for Pebble Beach, in August.

Billy, who is ranked 67th in the OWAGR, said after his defeat in the second round at Royal Aberdeen on Wednesday: “The wind won the battle today.

“I was more disappointed in my mindset towards the last few weeks worrying about the US Amateur and European Team Championship.

“Now that I can’t make either, I hope to concentrate on one week at a time and find the game I have seemed to have lost.”

McKenzie, who won the biggest title of his career so far when claiming the Spanish Amateur at La Manga, in early March, had missed the cut in both The Brabazon Trophy, at Frilford Heath, three weeks ago, and the St Andrews Links Trophy at the Home of Golf, a week later.

The 22-year-old booked his place in the last 64 after finishing in a share of 25th place after the 36-hole qualifier played over Murcar Links and the Royal Aberdeen course, which will host the seven rounds of matchplay over four days.

McKenzie was two down after nine holes but eventually ran out of holes against the South African.

Els has been helping his nephew with his golf career but the three-time Major winner’s own experiences of the British Amateur in the 1980s saw him knocked out in the first round twice in the first round, in 1987 and 1989.

He also qualified in 1988 at Royal Portchcawl when Brokenhurst Manor’s Nigel Graves reached the semi-finals – and ended up caddying for fellow South African Ben Fouchee in the final after the Big Easy was knocked out in round four.

McKenzie was in a good position to make the top 64 who qualified for the knockout after a round of 72 at Royal Aberdeen on Monday, despite his clubs going missing on the flight up to Scotland, which meant he missed a day’s practice.

His one-over par total could have been even better but for two bogeys on the back nine, after two birdies in the first six holes were balanced out by dropped shots at the seventh and eighth as he finished five shots behind the first round leader.

Murcar played much tougher on the first day and keen to avoid any card-wrecking numbers McKenzie made a good start getting to the turn in level par after bouncing back from a dropped shirt at the first.

He made birdies at the fourth – the only par five on the course – and the seventh only to give one back at the par four eighth and then made five at the 11th to fall back to one-over for the day.

With another South African holding the lead in the shape of overnight leader Wilco Nienaber, who carded rounds of 66 and 67 to get to eight-under, McKenzie made sure of his place in the hat by reducing the damage by finishing with four straight pars after double bogey six at the 14th.

That put the McKenzie through to the second round after the 16 players tied on six-over par met in the first round to take the field down to 64.

Dylan Perry, the Aussie who lost to Ellis in last year’s final missed out in qualifying by one shot.

Meon Valley’s Ellis came back from four down with five to play to win the famous trophy and earn a spot in the Masters. Corhampton’s Scott Gregory earned his spot in the Open at Royal Troon and a debut in the 2017 Masters by winning the British Amateur at Royal Porthcawl two years ago.

Both players had a US Open to forget at Shinnecock Hills, last week. Scott shot a first round 92 on his way to a total of 27-over while Ellis was eight shots better in what is expected to have been his final event as an amateur before turning pro.